Quick question – have you ever bitten off more than you can chew? 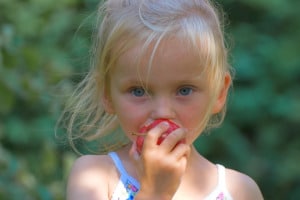 Where and how did that saying originate? It totally sounds like something a mother would say.

I spent a quick 45 seconds trying to research the origin of the saying but didn’t find much other than the idiom meaning: “Attempt a task which is too difficult to complete”  (and I found a fun World War II photo with the saying on it that you can see here).

Anyhow, I have a tendency to take on people and situations that I later realize are exactly that…way more than I can “chew”.

This past weekend this tendency of mine hit me full-force (really, it was my sister who hit me).

My sister reminded me when, several years back, I thought it would be really cool to host a foreign exchange student.  It was an expensive lesson to learn and I had quite vehemently said after the nine months that the next time I wanted to give back, I would give $1,000 to a charity instead.

Now I’ve done it again, as a business owner I continue to take on learning projects, classes and books in wild anticipation that I can become and be the best Virtual Assistant out there. I am working on balancing my bookkeeping services with social media services. But…just because I am striving to become known more as a social media Virtual Assistant does that mean I have to be present 24/7 on social media? I think not.

At some point one must realize — really realize — there are only so many hours in the day.  For me, the most difficult realization has been that my personal reading time has been reduced. I realize that I consume countless articles and newsletters that arrive in my Inbox. Additionally, I take time to read blog posts and links that others share with me. I read through Twitter streams in order to find 140 characters that are worthy of being re-tweeted.

If I RT a little less than you are accustomed to seeing or you see me on Twitter less..it’s not because I don’t have the time…it’s because I want to wrap my hands and mind around a mind-developing hardcover. (or maybe get those three pleasure websites built)

What have you bitten off? What commitments have you made to yourself to “empty your mouth”?