How a Cyberstalker Made Me a Better Person 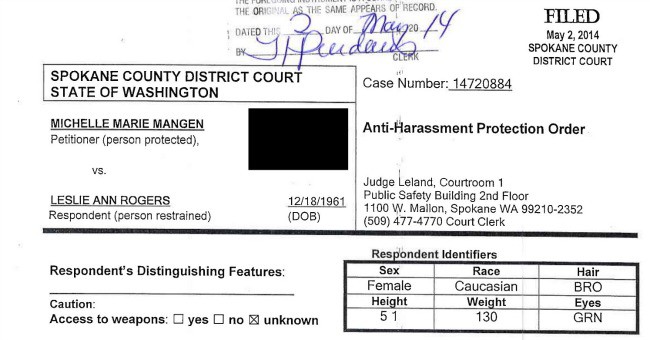 Update as of June 9, 2015: The harassment and cyberstalking from Leslie Rogers (aka Kellie Rogers, Jill Logan) has not stopped. The Spokane WA courts found her in contempt of “continuously” violating the protection order on April 3, 2015 and it was signed by the Judge on April 14, 2015. They also granted me a two-year extension on the original protection order issued on May 2, 2014.

I’m sharing my experience here and you can read why I decided to start writing about this again here.

Update as of Saturday, March 14, 2015: Despite having a permanent [download id=”0″] as of May 2, 2014 Leslie Rogers of Spokane, WA continues to electronically monitor and harass me and third parties connected to me all of which are direct violations of the court order.

The first known contact Leslie Rogers made to me was through Facebook using the name of Chris O’Leary on Dec. 12, 2012. That Facebook profile was created on August 25, 2012. I’m drawing the conclusion that she started gathering data on me long before she sent me the Dec. 12, 2012 messages. Those messages went directly to my spam folder and I didn’t find them until Sept. 8, 2014.

Her first known tweets to me were on June 21, 2013. Did she possibly send other tweets to me and I just missed them due to the inherent pace of Twitter? I believe it’s very likely. The ironic part is that I almost entirely missed the June 21-24, 2013 tweets which are what made me aware I had a “problem”.

Unfortunately this means she was gathering information on me and monitoring what I said, who I said it to, etc. long before I realized what was happening.

Please note that although her legal name is Leslie Rogers she also goes by Kellie Rogers, Kellie Ruggerio and Kellie Levy. She lives in Spokane, WA but is from Sandpoint, ID and claims to live in Vancouver, BC.

Of course, as you can imagine, she doesn’t use any of her real “names” when she creates Twitter, Facebook, Google Plus or email accounts.

To date she’s created: (these numbers may actually be higher since she doesn’t always contact me through the accounts she creates)

Below is a list of all of the known various personas she’s adopted to date. Without a doubt, she’ll continue making up new names and new accounts. If you’re contacted by any strange accounts referencing me, my attorney (Sarah Cuellar), etc. please take screenshots, capture the full profile URL and contact me.

I like my life. A lot.  Of course, there are things, in my life, that could be improved – such as my son not leaving his dirty socks laying in random places or the mess of shoes that lurks at the front door. I also haven’t been to a dance, zumba or yoga in over two months. But at the heart of it all – I’m surrounded by people who care a great deal about me and I’m blessed with a thriving virtual assistant business.

I believe in karma and treating others the way I want to be treated so it was a great surprise to me when I inadvertently (through no fault of my own) attracted a cyberstalker in June 2013. My best guess is that she (Crazy Pants) found me through conversations I was having on Twitter with a guy friend.

Her real name is Leslie Ann Rogers and she currently goes by several known aliases: Kellie Rogers, Kellie Ruggerio and Kellie Levy. She lives in Spokane, WA. Her “real” Twitter, as of the time of this writing, is @KellieRuggerio. Update as of May 6, 2014 @ 8:25 pm EST. She’s now changed her Twitter handle to @KellieLevy18)

What has transpired since June 2013 can only be referred to as Crazy (yes, Crazy with a capital C).

Here is just a partial list of what’s happened:

Because of all of this absolute craziness, which has drug on for 11 long, long months, I have out of pocket / loss of income exceeding $8,000 and my stress levels have reached an all time high; so it may seem counter-intuitive when I say – Crazy Pants has made me a better person.

How has a cyberstalker made me a better person, you ask?

It comes down to one simple thing.

She forced me to say no to others so I can say yes to myself.

What exactly does that mean?

I began a quest to learn all I could about cyberstalking/online harassment and how to pursue legal action. In hindsight I should have kept track of the number of hours I’ve spent with all of the research and other time invested over the past 11 months. It’s been horribly time-consuming and I realized, after eight months, (I can be a slow learner!) that I either had to continue staying up until the wee hours of the morning or I was going to have to let some clients go in order to free up the time I needed. The lack of sleep has contributed to the health problems that have arisen, mainly due to the stress associated as a result of her antics so the only option was for me to let go of billable hours.

Deciding which clients I was going to let go was one of the most heartbreaking and emotional decisions I’ve had to make in my five+ years of business. And if I’m honest about it, I was really angry (at Crazy Pants), for forcing me to decide between dealing with her shit and doing the work I love. Seriously  –  why did I have to let go of income to deal with her Craziness?

But it is what it is and with some re-framing I realized the hand she “forced” for me would allow me to:

Despite these “hidden benefits” I wouldn’t wish this on anyone. As of Friday, April 25, 2014 I have an enforceable [download id=”0″] (which is why I can publicly talk about this now) so hopefully my story is over soon. Maybe I won’t have any more of my precious time being allocated to her. The thought of newly found “free time”, and all the possibilities it presents, makes me so incredibly excited!

Thank you, Crazy Pants, for making me a better person.

And so I start a new chapter of my life…..

Related Post: A Look Back: A Year of Cyberstalking – How It’s Affected Me